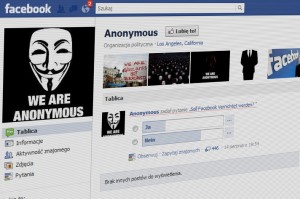 Well… maybe not killed but made it less useful for a short period of time. As i wrote in the “Save Facebook from Anonymous” post I was suspecting some kind of flood, including spreading some notorious “Facebook” viruses. I’ve put that in quotes as those viruses are only using the portal as a medium.

How does it work

Their chief weapon is surprise…surprise and fear…fear and surprise…. Their two weapons are fear and surprise… and curiosity… We’re still talking about viruses, not Monty Python… The “Facebook” ones are based on curiosity – you can easily find your friends’ posts including “You won’t go to McDonald’s after watching that movie” or “Lady Gaga naked pics”. If you click it you might end on a page that will use security holes in some browsers to repost this entry on your wall… and maybe add some more… and answer some random polls… and flood your friends with invites, events and so on.

What didn’t worked as it should on that day – the well known Facebook’s security mechanism they talk about from time to time. Any increased activity in any area (for example: average level of new polls in Poland at Monday, 4 PM increased by 300%) should start a self-defensing settings that will slow down the flood for a while and alarm IT guys that will decide whether it’s a false positive or a real threat.

I do expect more of those attacks… but they should become more sophisticated than what it is now. This includes taking full control over an account (dictionary password attack), flooding and account removal.